New: Grantmaking with a Racial Justice Lens
Are you ready to move your foundation beyond racial equity to a racial justice lens? This new guide offers practical steps and resources for advancing racial justice in any philanthropic setting.
Learn More
About Philanthropic Initiative for Racial Equity
Since its inception in January 2003, PRE has directly engaged hundreds of foundation representatives (including program staff, management, board members and individual donors) in discussions of racial equity and, in particular, how they can advance the mission of achieving racial equity through their own philanthropic institutions.
Read More
What does philanthropy need to know to prioritize racial justice?
Our guide helped surface how to advance racial equity in philanthropy, aiming to make it a core practice and goal of grantmakers. Rather than other popular approaches of the time—“colorblindness,” universal approaches, diversity—PRE’s guide defined a racially equitable world as one where the distribution of resources, opportunities and burdens is not determined or predictable by race.
Read More
Previous
Next

The goal of the Philanthropic Initiative for Racial Equity (PRE) is to increase the amount and effectiveness of resources aimed at combating institutional and structural racism in communities through capacity building, education, and convening of grantmakers and grantseekers

The goal of the Philanthropic Initiative for Racial Equity (PRE) is to increase the amount and effectiveness of resources aimed at combating institutional and structural racism in communities through capacity building, education, and convening of grantmakers and grantseekers.
Read More

View our featured list of resources that deal directly with the intersection of philanthropy and racial equity and/or diversity or explicitly address issues of institutional and structural racism.
Read More

PRE recognizes that there are a broad range of effective programs and practices to address racial inequities. There is an increasing level of sophistication within the racial justice field and much more awareness of which approaches meet which needs best.

Whether we are talking about ways to engage communities or ways to engage foundation staff and boards, PRE understands the importance of meeting people where they are on their own continua of learning and comfort level in addressing what can often be difficult and controversial issues. We also recognize that peer learning and support can be critical when facing these challenges, and we work to provide the space and tools that will allow this to happen.

What does philanthropy need to ask to deepen investments for racial and gender justice?

Investing in communities of color has meant greater impact.  It is clear that the most effective work in the country is often done by People of Color-led organizations that are deeply committed to long-term systems transformation. The phenomenal work of Black women led organizations to deliver historic electoral wins, the transformative work of indigenous leadership to defend Standing Rock, and breakthrough work on immigration rights are just a few examples of organizing in communities of color that is redefining change work and breathing new life into US democracy.  Philanthropy has been making a shift toward recognizing these assets and away from the old dominant paradigm of limited, deficit-oriented funding.  –  Upcoming Grantmaking with a Racial Justice Lens, Philanthropic Initiative for Racial Equity.

Women of color across the country are leading justice movements that bring positive lasting impact for all in our communities.  Numerous articles and reports have recognized that Black women voted in higher percentages than any other demographic groups in the 2012 and 2016 elections.

Additionally, Ahead of the Majority supported by the AAPI Civic Engagement Fund and Groundswell Fund, tells the story of women of color (not just women or voters of color) taking center stage.

Major movements like #BlackLivesMatter and #MeToo have been launched by the leadership of Black women such as Alicia Garza, Patrisse Cullors, Opal Tometti, and Tarana Burke. In addition to Black women, Indigenous, Latinx, Asian American, and Arab American women have fueled much of the responsive and proactive visioning our nation needs to build a just democracy.

And yet, in spite of the power of this work, in 2016, U.S. grantmakers continued to underfund efforts that are directly resourcing organizations that are focused on women and girls of color.

According to the latest available data from Candid, (formerly Foundation Center and Guidestar), only .6% of the $24.2 billion granted domestically by a sample of 1,000 of the largest U.S. foundations was focused on women and girls of color in 2016.

PRE is excited to announce: Grantmaking with a Racial Justice Lens – A Practical Guide 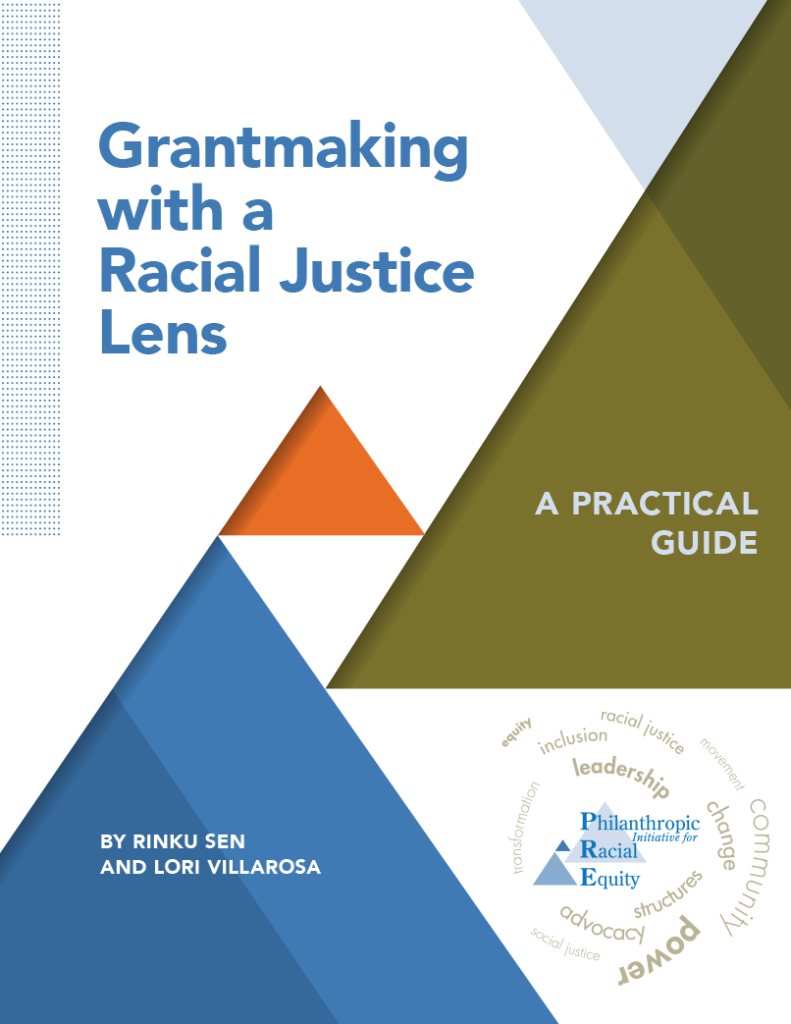 There has been significant work in the nonprofit & philanthropic communities since Grantmaking with a Racial Equity Lens was produced by PRE & GrantCraft more than 13 years ago.

Movements have grown in their intersectionality, their sophistication and reach and many nonprofits and organizers have been actively contributing to their gains as well as being pushed themselves. Many funders and philanthropic infrastructure organizations have taken on the language and principles of racial equity in their changing practices. Yet so much work remains, so many inequities continue to be exacerbated even among those seeking to do the right thing in a changing world.

In recognition of the complexity of these shifts and the evolution of the work, PRE has published Grantmaking with a Racial Justice Lens: A Practical Guide, to help foundation leaders understand what it means to move from racial equity to racial justice funding strategies, co-written by PRE Senior Fellow Rinku Sen & Executive Director Lori Villarosa. It also addresses how to align operational practices to both reduce racial inequity and advance racial justice, with a chapter on selecting the right tools and consultants written by Maggie Potapchuk.

The guide centers what racial justice activists want funders to know and includes experienced funders’ stories and how-to tips on advancing foundation practices to achieve racial justice. This includes responding to resistance; resourcing in ways that builds power, tackles anti-Black racism and white supremacy; correcting the course of some problematic trends; and more.

Grantmaking with a Racial Justice Lens can be downloaded for free here.

Amid Demands for Change, Here’s How Philanthropy Can Back Underfunded Black-Led Groups

By Julia Travers, Inside Philanthropy
June 17, 2020

Philanthropy and Racial justice – Can It Be Different Now?

Racial Equity needs to be more than Philanthropy’s catchphrase

By Sharon Bush, The Chronicle of Philanthropy
June 5, 2020

Be the first to receive PRE’s latest racial equity and justice resources for useful information and tools that will maximize your foundation’s positive impact on ALL communities. Please fill out the form below.

Get the Guide – Grantmaking with a Racial Justice Lens can be downloaded for free. 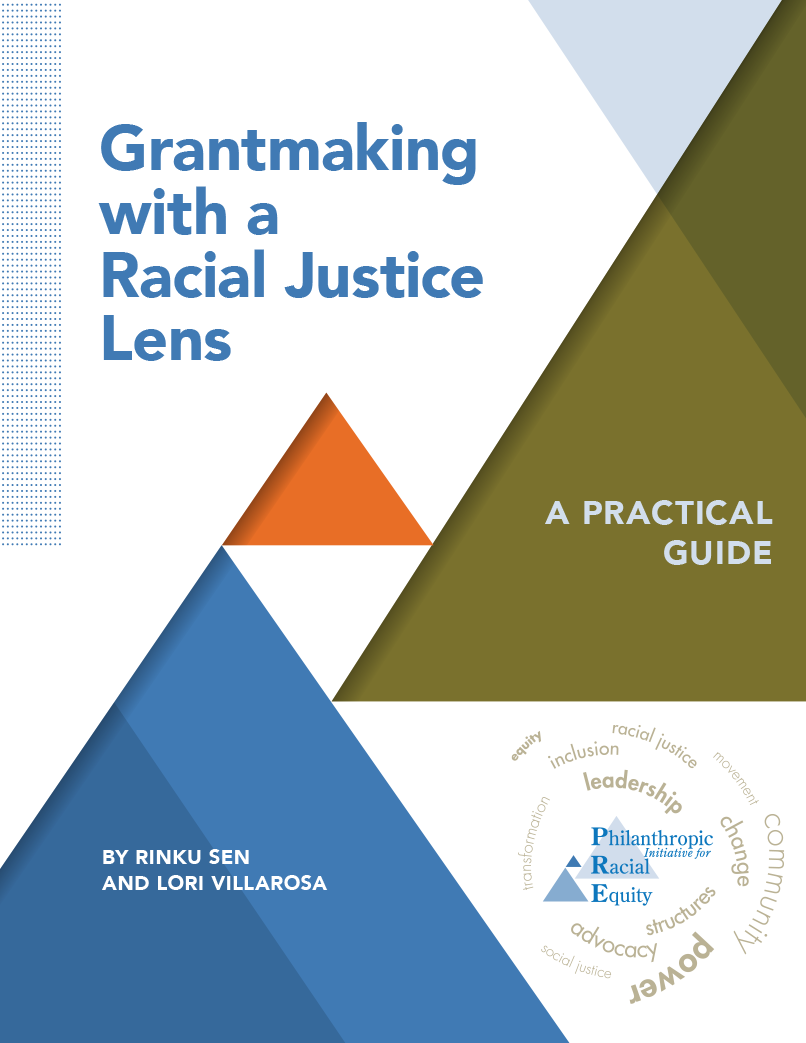