For funders seeking to understand and provide resources in support of racial justice work, this timeline also includes some of the key events in philanthropy that were shaped by the incidents, policies and cultural manifestations of race and racism during these years. 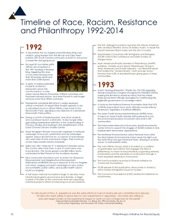